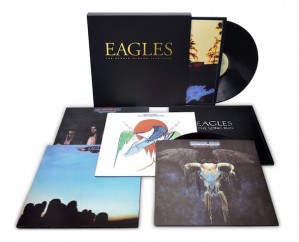 The Eagles’ original Asylum Records studio albums, including each of the chart-topping albums the Rock and Roll Hall of Famers released between 1972 and 1979, will be released on 180-gram vinyl in THE STUDIO ALBUMS 1972-1979, a limited-edition, six-LP boxed set available October 29.

THE STUDIO ALBUMS 1972-1979 includes each of the six Eagles albums that defined an era. Each LP features replicas of the original album packaging with two special artwork upgrades – the sleeve of the debut album, EAGLES, will finally be released as the band originally intended, with no glue flaps, so the cover folds out into a poster, as described in this year’s acclaimed documentary History of the Eagles. HOTEL CALIFORNIA will include a replica of the poster from the original issue with band photos by Norman Seeff in full color, for the first time. THE STUDIO ALBUMS 1972-1979 is limited to 5,000 copies and comes housed in an individually numbered slipcase with a gold foil stamp of the band’s logo.

EAGLES: THE STUDIO ALBUMS 1972-1979 includes:
EAGLES
DESPERADO
ON THE BORDER
ONE OF THESE NIGHTS
HOTEL CALIFORNIA
THE LONG RUN